This is Holy Week across Christendom. It is fascinating in a way how a ages-old tradition such as Christianity can be promoted with ideological zealotry, persecuted with fanatic fervor and dismissed as a quaint folkway, all at the same time.

I am not about to start preaching, but factual things fascinate me. Take The Bible, for example. Whether one leans toward The Bible as the word of God, the babblings of the misguided or idle scribblings, it is a simple fact that The Bible stands as one of the oldest of all written communications on earth. It is a further fact that the contents deal with society, history, economics and law.

As such, a casual observer would think that everybody would be interested in it, if only for its age, its complexity coming from Bronze-Age nomads and its stories.

Take the story of The Tower and City of Babel, for example. This is in the first book of The Bible, that being Genesis. A quick plot line is that a bunch of people decided to get together and build a giant city with a defining tower. It was to be the engineering marvel of its time. I can’t tell you its time. I am just a storyteller, not a historian. It may have been before or after the pyramids of Egypt or the Hanging Gardens of Babylon. I have no clue. Let’s say 10,000 years.

However, assuming we are looking at this as a myth or folktale, it was decided to upset the building of the tower, and to do this, the people had their language confused. The idea was that if everybody spoke the same language, nothing would be impossible for them.

As noted, I’m not going into reasoning, here. It’s a story. But as a word guy, I find it fascinating that 10,000 years ago somebody wrote a story, and that story recognized the power of unified speech and unified action, and it recognized how confusing speech leads to confused and ineffective action.

Cool, eh? It’s as if a tribe of Bronze Age nomads predicted in advance the effect of Political Correctness on morals and society. You confuse the language; you derail progress. Also, to the degree the language is confused, progress is derailed in a direct ratio.

To bring this idea into the moment, what would happen if you were using a software program for a major installation – let’s say a casino, just to be PC – and suddenly everybody using that program could not tell whether the plans were in metric or imperial units? Modern English or Celtic runes? Or what if all the words were there, but 20 percent of the statements were false?

You can go through the whole book that way. For example, it says in Proverbs that a man that spares the rod spoils the child. (Actually, it says “loves not his child,” but let’s stay current.) Forget about whether you agree or disagree about discipline. The fascinating thing is that 7,000 years ago a human being wrote down a list of wise ideas, among them being that discipline helps children. It’s almost as if there was a teachers’ union at the time that was demanding that children be coddled into emotional incapacity and their parents jailed for frowning, so somebody decided to memorialize it in print so subsequent generations would not fall into the same error.

Anyway, it’s Holy Week. ISIS has declared war against Christians and has blown up 44 Coptic Christians in Egypt. Trump is staring down a heathen despot enamoured of gassing children and his chubby, manic mini-me on the Korean Peninsula. Communication has ground to a full stop, and nobody is making progress.

For myself, I am throwing myself full-bore into an article of faith which holds that rabbits lay muddy-coloured, hard-boiled chicken eggs. Two of my grandchildren will show up on Sunday and dutifully adopt the same article of faith and wander around the property discovering clever places rabbits abandon eggs once they have laid them.

I took a photo last week of the mink across the river. They are there every year, although if you think about it mink don’t live that long. It is subsequent generations. 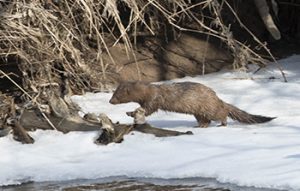 Each year, in about two weeks, the mink will start moving their pups one at a time from the deadfall 100 meters downstream to the deadfall right across from our place. I don’t see them every year, but when I do it’s a treat.

They move the pups so they can teach them to fish. There is a rock in the river with an eddy behind, and each year the parent mink take the pup mink and teach them there are brown trout in the eddy.

It wasn’t always brown trout. Before the browns it was brook trout and Atlantic salmon, and it wasn’t the same rock, but it was that rock’s predecessors. For the last 10,000 years, the mink have been moving their pups, the trout have been behind the rock and the mink pups have been taught.

This never changes. The trout never learn and the mink never forget.

Thanks for reading these periodic notes over the years. I hope our magazines help in areas of your business you can’t monitor by yourself. And thanks for the many supportive notes and comments. You can’t imagine how good it makes our small group of specialists feel to know their work is recognized. Without question, I am working with the most accomplished group of professionals today that I have ever worked with, and that makes the labour worthwhile.

Have a great remaining Holy Week, and have a happy Easter.

P.S. If you put those eggs in a glass jar 1/3 full of water and shake them, the shells will get pulverized, a bit of water will get under the skin and you can slip the egg-salad part out from the shell with no problem.

E-letter: We can work this out