A few years back, we did a survey that showed how you viewed Wood Industry magazine versus our competitors, how you viewed social media, how you viewed the market, etc. Subsequently, we said we were going to quit the annual, November Readers’ Surveys, since the retail world went berserk demanding reviews and surveys on everything from non-stick woks to cell phone cases. It was offensive, and we did not want to add to the chaos.

However, our surveys were different, and we recently had to explain that to our industry’s suppliers. Surveys actually provide useful and valid information, if you can keep the millers from sticking their thumb on the scale, to borrow an old metaphor. Here at W.I. Media, we ALWAYS choose a statistically valid sample size, and we ALWAYS make sure it’s a random sample. We need to know your view of the state of the industry, and we use that information to help. For just one example, it is impossible to overstate the danger we are facing from digital manipulation. We are interested to know whether you have invested heavily in digital marketing, whether you have been the victim of hacking, theft or ransomware, and whether you know your data-related costs.

In case you didn’t see this coming, we will be sending out a survey in October. If you receive one, you are one of a randomly selected set, and your answers in the past have put us at an over 11 percent response rate. This is stunning, it reflects on how you feel about Wood Industry and it allows us to keep our sample size valid where none of our competitors can follow. You are the BEST, and we try to recognize that in public every chance we get.

Switching topics, things appear great for our industry looking forward. Building permits, housing starts, renovation investment and home prices are all in record territory and moving up. It appears the U.S. tariff war with China will continue for now, and I predict Trump will not back down. By that, I mean that whenever a final resolution is found, China will not have the same influence in their markets or ours in terms of intellectual property, dumping, currency manipulation or standards violations as it has. On some level, they will have to play by the same rules as do the rest of us. That said, I am now concerned that operating in this environment as we have for the past 15 years may mean that we have adopted our own less-than-ideal practices in an effort to compete. It is time to rejuvenate such ideas as “buy cheap; buy twice,” and “you get what you pay for.”

Importantly, this kerfuffle with China has its foundation and its solution in politics. From time to time, individuals ask us why we focus some of our editorials on politics. To us, the answer should be self-evident. Politics is what determines your food and water, your housing and transportation, your work and your products, your recreation and your beliefs. I’ll likely go to jail for this, but politics have decided we, as a culture, can’t tell a girl from a boy. On that level, I have had it. As before, I just want to know who says so. I have done some work in linguistics, so I’d like a debate.

We are entering a critical time in Canadian politics. It’s called an election cycle. We have to vote before WMS on our next Prime Minister. I know — you want to tell me in Canada we don’t vote for Prime Minister. Well, we do.

Corruption remains my biggest concern. Has been and will be. I guess one new spin is that we have allowed digital dazzle to befuddle our brains. Another is that we have decided to let the smallest, most statistically deviant minorities dictate social protocols for the majority. This is stupid.

Dictation seems to be the special child of the Left. It seems to be a characteristic of the Left that they find a good idea, and then try to make everybody else do it. One additional problem I see is that, once having run out of good ideas, they seem to have no restraint, and will pick up almost anything.

So, here we go. As I always say, vote for whomever you wish or don’t vote at all. But don’t complain later. Somebody is going to decide your future.

Come and see us at WMS, and let us know if you have a survey question you would like presented to your peers.

E-letter: Coming out of hiding 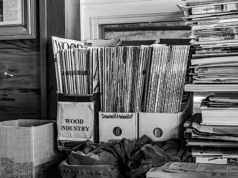