There’s a line in a song by the legendary Maritimes singer/songwriter, Stan Rogers, about an Alberta rodeo-star-turned-rancher-being-cattle-rustled that goes, “Forty-four’s no age to start again.” But that’s exactly what Gary Litwin did when he started Union Square Vintage Wood Co. in Montreal.

A dynamo who thrives on the unknown, Litwin laughs, “I had no idea what I was doing. I put the boat in the ocean, and it sailed.”

Born and raised in the Côte-Saint-Luc district, Litwin knew nothing about the wood business. He had spent almost 20 years in his family’s fashion textiles import business, never finishing McGill University studies in political science. After leaving the family business, Litwin was just two years into running his own small textiles company when the wood business called him — sort of.

Rooted in the Catskills

Three friends had invested in a business in the Catskill Mountains, in southeastern New York State. The owner “was essentially a lumberjack” who demolished old homes and barns, and had stockpiles of reclaimed hardwoods. His wife was Ontario-born, and knew the wife of one of the three friends. During a holiday trip to Montreal, the New York man persuaded the mutual friends to invest $750,000 in his business.

The plan was to use the reclaimed wood for building Catskills homes along the Hudson River, to sell to young Wall Street brokers who couldn’t afford The Hamptons. Litwin’s friends expected to stay on the sidelines in Montreal and reap the profits. But just as the Catskills business was launched, Wall Street crashed and the business venture collapsed.

“They didn’t know what to do,” Litwin recalls. “They didn’t know anything about wood.” One of the partners was in commercial real estate; another was in textiles; the third was in the recycled boxes business.

Jumping in over dinner

The desperate trio asked Litwin over dinner one evening whether he wanted in. “They thought, ‘maybe we’ll take the wood and we’ll make tables with it; we’ll open a showroom,’” Litwin explains.

Litwin jumped at the opportunity. Two of the three friends joined in as partners; the third cut his Catskills losses and ran. The friend in the textiles business connected Litwin with Cory Wittebol, a craftsman who ran a wood shop in North Montreal, and who had built the interiors of a national chain of fashion stores. The friend in commercial real estate owned a building on Avenue Royal Mount. The partners gutted an empty basement-level space and complete re-did it, creating a unique showroom. Union Square Vintage Wood Co. was born.

There was one big obstacle to overcome. “First I had told my wife that I was leaving the family business and opening my own, and then just two years into that here I am telling her that I’m getting out of it and going into the wood business. Those were all some challenging conversations,” Litwin chuckles.

Litwin simply didn’t want to be in the fashion textiles industry anymore. Business was getting tougher, and just being in the industry was eating him up.

For a while, he ran two businesses at the same time, slowly winding down his textiles company.

Union Square was just six months old in the spring of 2012 when on a Friday afternoon, Litwin made a fortuitous telephone cold-call. A local architect just happened to need wood for wall paneling, table tops and bar tops for a restaurant project. Litwin packed wood samples in the same sample bag he had once used for textile swatches. A 10-minute drive later, he was in a face-to-face meeting.

“For the first time in my life, I was quiet,” Litwin laughs. “I let them talk. I had to get through that meeting without the customer knowing I didn’t know what I was doing. It was a challenge,” he laughs.

Since winning that initial $50,000 restaurant contract, Litwin has done about eight projects for that architect, and they have a great relationship.

Litwin says all of his business and sales experience in textiles has helped. It wasn’t long before Litwin was able to buy out his partners. Now, he single-handedly runs every detail of the business except the production shop, which is overseen by Wittebol. “The only thing I don’t do is cut anything,” Litwin laughs. “I’m paranoid of a saw.”

Litwin moves at a seemingly frantic pace from one thing to another. One minute he’s on the phone with an architect going over details of ongoing project; then he’s answering emails from designers looking for samples and a customer who wants to buy more wood; then he’s fielding a call out of the blue from an architectural firm that wants to know if he can deliver samples to Toronto by noon on Monday, in time for an afternoon meeting with their client. (It’s Thursday afternoon in Montreal.) All while he’s talking with Wood Industry.

Litwin doesn’t waste a minute of his days. During a 25-minute drive from the showroom in Mount Royal to the production shop in North Montreal, he’s constantly on hands-free making or answering calls. Being always on the go is his nature, and he thrives on it. “My wife can’t believe how much I get done in a day,” Litwin says.

Planning not to plan

It may seem frantic, but it’s actually systematic. All ​Litwin’s project files, for example, are colour coded — blue folders for Ontario, yellow ones for Quebec. Emails from the previous day that he needs to respond to, are printed out and stacked neatly on his desk.

But he doesn’t actually plan his days. “My only plan is to go to work every day,” he says, adding, “I never know where the next email or phone call is coming from, and that’s what I love; that’s what drives me.”

The first thing he does four days a week is get up early and run for an hour. “It energizes you,” Litwin says. When he gets home around 7:30 each evening, he winds down with a glass of vodka and watches sports. He has all the sports channels in his television package. Baseball is his passion; he yearns for the day Montreal once again has the Expos. “I’ll never be a Blue Jays fan!” Litwin exclaims.

Litwin is custom-manufacturing everything from floors to wall panelling to ceiling beams to tables and bar tops, beds and entire rooms of furniture. For some projects Litwin still uses the reclaimed hardwoods from the Catskills; for others he uses new hardwoods.

In just three years since that first $50,000 contract, Litwin has several architects, designers and condominium developers as customers. He has built a clientele across Canada, and some in the U.S. He has done work for Montreal hotels, Kelsey’s Restaurants, Timothy’s Coffees of the

World, Creemore Springs Brewery and Baton Rouge in Ontario, McDonald’s in the Bell Centre (and he’s working on the McDonald’s in Toronto’s Union Station), East Side Mario’s and Starbucks. In fact, he gets all the Starbucks jobs from Quebec east. He has won most of his business by doing his favourite thing — cold-calling people and talking with them.

Litwin’s philosophy is simple: give your customers great service and great value. His wife Angie is very amazed at and very proud of all Litwin has accomplished from scratch in three years. Litwin considers himself successful only from the perspective that he gets up every morning and loves what he does. Otherwise, he says, “I’m always reaching for the next level.” 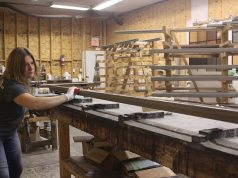 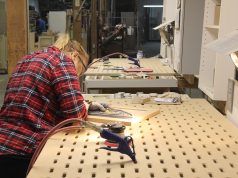 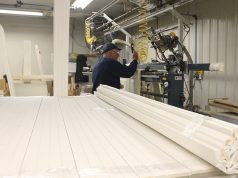