You know, you folks are not all that easy to write for. Seriously.

For example, most of you are owners and managers of family owned businesses. Yes, we all know most of you are “incorporated” to meet legal definitions for tax and liability purposes, but you are the new iteration of sole proprietorships. Mom-and-pop shops. Small- to medium- sized businesses.

For you, your net worth is on the line. Your future. Your legacy. And it’s not just money. It’s who you are and what you did. It’s not like you can bet large with your boss’s money, kill the company and go to a competitor. It’s a corner piece in the jigsaw of the secondary wood industry in Canada, complete with a tax number, annual minutes and articles of incorporation. You may be just a statistic in the eyes of Statcan, but that elevates you in the eyes of Revenue Canada to the same stature as INCO, albeit an easier target.

There is more. Metal fabricators, electrical engineers and road contractors can be family businesses, as can pig farms and laundry mats. However, even though you technically deal with production, most of you have one-on-one contact with your end user, and she or he may not be all that interested in efficiency or value streams. “The way it looks” may be all that matters.

In that case, most of you are creative — you have an eye for decorative design and a language to communicate it. On the other hand, you have a large capital investment. This combination of high-creative and high capital is rare. On the one hand, it keeps you distinct from the other production markets. On the other, it makes it hard to plan for business succession. Most creative people aren’t that good with money, and most money managers are not known for creativity.

Most of you have direct interaction with your communities. While it is common for our readers to export, it is more common that they started in and also serve their local and regional markets as ancillary markets even when focused south.

This is also a critical factor in trying to write for you. For people that work in mines, roads, construction, government, finance or education, the idea of interpersonal relationships boils quickly down to office politics. If you don’t believe that, explain the popularity of the comic strip, “Dilbert.” With people whose livelihood depends on supplying durable goods for a local or regional market, and doing it with local and regional labour, interpersonal relationships are not a matter of office politics; they are a matter of existence.

The list goes on, but I don’t want to cloud it. The mix of ownership, creativity and resource management makes this audience different from engineers, metal fabricators, Bay Street and Ottawa (thank God). 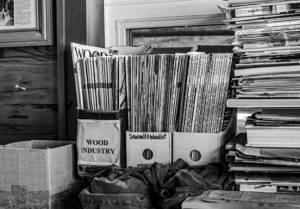 Because I have such high regard for what you, collectively, have done and are doing for Canada, I am a bit shocked and very humbled to walk into one of your shops, as I did at Yuill McGregor’s North on Sixty shop early this month, and see what I saw and photographed in the image at right. What a vote of confidence!

So what’s the relevance? Everything.

Somewhere back in the late Cretaceous Period, a few errant salesmen tumbled to the fact that you, the audience, need information, and that their products are information. Therefore, they reasoned, because they pay for space to advertise, they should own every publication they advertise in. This is not a Kerry Knudsen fantasy. I have been told as much, point-blank. But be cautious; it is fewer than 10 percent of suppliers, and for the most part they are the employees of mega-corps, alluded to above. The other 90 percent are the critical aspect of the industry that allows you to create and sell what you do on a less-parasitic basis.

It was not long before the Cretaceous-era deal-makers heard about “value-added.” I tried to explain that value- added is always value-subtracted from the value of the information to the audience, but I was told I know nothing. Well, I may not know much, but it is now some time of thawing since the late-Cretaceous, and I have not changed my idea. Deal-makers should stick to their knitting.

Then it was websites. Then it was MySpace. Then it was Facebook and “social.” All the agency new-hires then came up with “programmatic” and “influencers.”

At each turn, since I was told I know nothing, I came to you, the readers, and I sent out surveys. I asked you whether you want daily e-blasts from amateur reporters that wanted to turn magazines into newspapers. You said no.

I asked whether you wanted me to end the print edition of Wood Industry and go (cheaply) to digital. You said no.

I asked whether you wanted me to send e-letters weekly or daily. You said no.

I even got amused and asked who you think is the most-recognized personality in all of North America in our industry, and you, recognizing the joke, obliged me with the overwhelming response that it is me, with poor-old Mike Holmes running a far-distant second.

It was a joke, in a way, but as with all jokes, it is based on a foundation, and that foundation is your voices telling the suppliers that you know damn good and well what is going on, and you want to name your “influencer” as somebody you know and trust, and you don’t want to be told what to do. I mentioned this in my interview with Yuill, and he jumped right on the topic. “I won’t be told what to do, either,” he said.

So, while you are a tough bunch to write for, I’m glad you let me in, glad we have stuff to do and glad we didn’t end up in a cube farm, hashing out action plans for middle managers.

The fact is, that bottom 10 percent of sales guys will still be around, intent on getting your attention without supplying value. My advice would be to know who your friends are. That’s what I try to do, and I have a lot.

E-letter: You be the judge